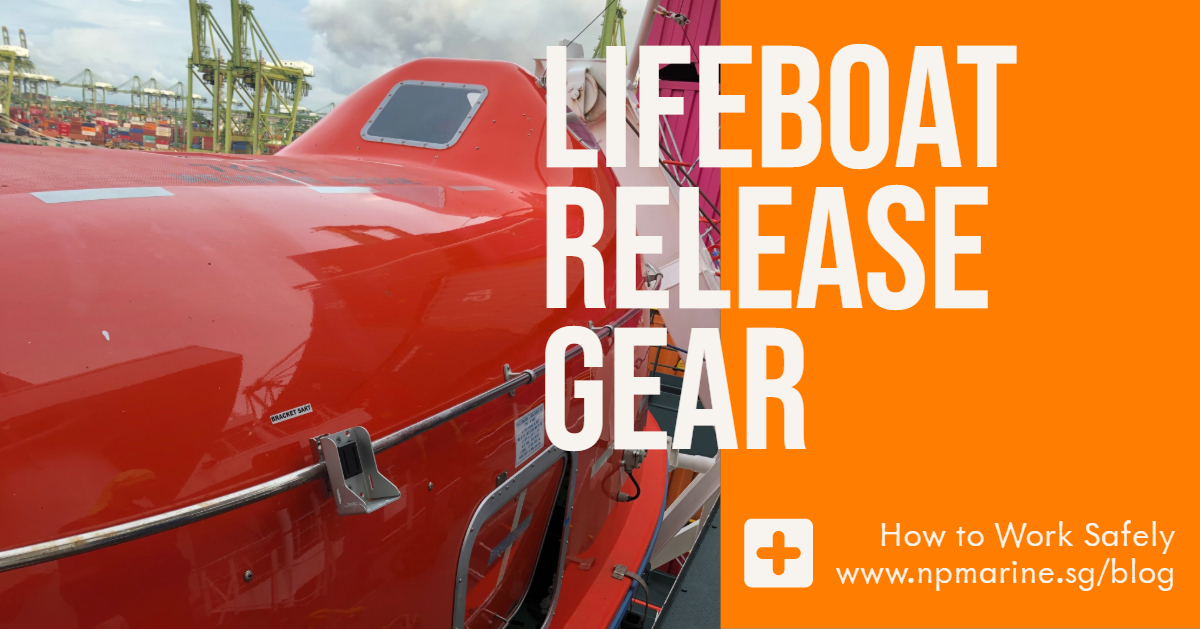 Maybe you have been in a sticky situation with your conventional lifeboat and need to work on the release gear mechanism urgently. You just need a quick work or it is so urgent that you cannot wait for authorized service station. In this case, you just want to know how to safely work on your lifeboat release gears and need some simple guidance to be sure that you are doing it right. As someone who has been working with lifeboats since year 2007, I like to share some tips how to be safe with working on lifeboats release gears, this is the method taught by the manufacturers and our service technician uses the same way to secure the lifeboats before working in them. I try to make this article as simple as possible and include useful photos.

If possible, see from the window or open the side hatch door to see if the release handle is at the locked position and the safety pin is inserted. Sometimes, it might be at the opposite side and it will be difficult for you to check unless you enter the lifeboat. If not possible to check, then leave it for now. We will check it later.

Next, make sure the davit arms are locked and the pins are inserted at the forward and aft side. Even though we are not going to work on the brakes but the boat falls will have to be slacked so there is enough allowance to lift the boat up and keep the suspension ring "without load". Therefore, we cannot allow the davit arm to move when we slack the boat falls.

The good news is, to work safely in the lifeboat, you just require basic PPE which can be found on all ships.

The dangers of securing a lifeboat cannot be underestimated, and we highly recommend that PPEs are equipped before proceed to securing the lifeboat.

Other important PPEs to wear are:

1. Safety Helmet - To protect against bumps and falling objects,

2. Safety Glasses - During installation of chain blocks, sometimes paint chip and dried grease will get into your eyes, causing discomfort. It is dangerous especially when you are carrying a 20kg chain block with you and balancing yourself in a small space,

4. Gloves - Protect your hands from crushing, cuts and abrasion and

5. Coverall - Protection against cuts and abrasion

The most important tool for making a lifeboat release gear safe for working is the chainblock. For normal merchant vessel lifeboats of about 30 persons, I will recommend to use 2 units of 3 tons chain blocks with 4 pieces of 4.25 tons shackles. Also required is fall preventive device. Although it is no longer required for most lifeboats now since it will be built into the release gear design, we still recommend to use a pair when you are working on the lifeboat release gears as a secondary safety feature in case your chain blocks failed. That goes to say, make sure the chain blocks that you are using is of good condition and loaded tested to be able to carry its intended maximum working load.

Never use a chain block that is in poor condition. Our chain blocks are always load tested and certified by PE.

Always work with your buddy when installing a chain block. 1 person will need to stand on the lifeboat with the safety harness equipped, while the other person will have to pass the chain block over once the first person has properly positioned himself. Do not attempt to do it alone and without using safety harness, if accident occurs, it can be fatal.

For some davit designs, it is necessary to loosen up the lifeboat lashing before you proceed to hoist the chain blocks.

Lifeboat release gear is a fairly straight forward design and the manufacturer's manual normally comprises of sufficient information to operate the release gear, lock and unlock. Within the lifeboat, there are always stickers to remind operator how to use the mechanism. In spite of this, due to the simple mechanical design of the release gear, parts fail over time and need to be operated regularly to check if the mechanism is still working well.

There are a couple of problems I commonly found during inspection and some of them can be easily fixed by the crew without the need for external specialists.

If you have the JX-1 model (made by Shanghai Shenkong) lifeboat release gear, this is often the contributor to release gear and its secondary locking device unable to lock. After the weight of lifeboat has been transferred to the chain blocks, release the lifeboat release gear, turn the hook backwards then pick up the bigger pieces of debris. Then use pressured air to get rid of smaller debris. Remember to wear safety googles.

There are also possibility that the exposed part of the push pull cable being covered with rust or salt. You can just use a brush to clean the surface of the cable, then wash with lubricants like WD40, then operate the release gear several times to make the cables working smoothly again. If left uncleaned, the cable will become difficult to operate, and most of the time, requires excessive force to lock and unlock the release gear, resulting in cable damage.

When to call a specialist

If during maintenance or drill, and you found the following scenarios, then you should probably call a service station to assist you.

A conventional lifeboat's release gear system comprises of several different designs but the design principal is fairly the same. There is always a central control device to unlock and lock the release gear. The unlock/lock movement is actuated by the push-pull cable to control a locking piece. And in recent years, secondary locking device is added to the release gears as an additional safety feature but the design remain similar.

It is highly recommended that a set of spare cables is kept onboard the ship for emergency replacements if the existing ones are found damaged, most of the time, I found the cables broke inside the sheaths and it is unable to inspect visually. You will only notice it is broken when you operate the release gear.

Then, I also recommend that the lifeboat release gear is operated at least once a month to ensure it is working well at all times. If you are checking release gear operation using chain blocks, you reduce a lot of risks as comparing to lowering lifeboat to the water. You can perform your task safely and in a calm manner. In case of failure, the chain blocks are there and you can keep it hanging until release gear problem is fixed.

If unsure, it is always a good idea to notify your local service station to check the status of the release gear and get it fixed. Lifeboat release gear is one of the main causes of lifeboat related accidents and a major component of a lifeboat. There is no need to be overly worried about working on them if you learn how to do it safely. Always be sure to keep it in good working condition.

If this article has been helpful, feel free to share the link to someone who needs it. And if you have some inputs or photos to contribute, please reach out to me via Linkedin message or email.